Why My Company is Called "Silver Lining Pet Services 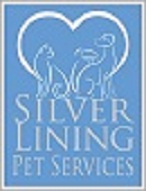 Recently, a new client said that she was initially turned off by the name “Silver Lining Pet Services.” She said that it brought to mind the idea of death and funerals. This was, to say the least, upsetting to me. It is certainly not the image that I had hoped to project when I named my business. This is not the first time that I have been told something like this, however. About a year ago, a neighbor, noticing the name of my business on my car door said something about the fact that she had recently had a dog die; and that she would have used my services at that time if she had noticed the door sign soon enough. I didn’t ask her why she thought that my business had something to do with dead dogs. I was merely puzzled that she hadn’t noticed that under the name of the business it talked about dog training and pet sitting.

After the client told me about this, I explained the name to her. And, I figured that I might as well explain it to the world, as long as I’m at it. So, here goes…

In 1991, I acquired an older puppy, which had been found by a co-worker in the mountains. At the time, I was working for the US Forest Service, and the Calif. Dept. of Fish and Game studying mule deer fawns in the Warner Mountains. The Warners are a small spur of the Cascade Mountains located in the northeast corner of Calif. The woman who found him named him Jake, and I kept the name when she gave him to me.

I loved Jake dearly, and wanted to help him. That’s what led me to C. William Meisterfeld, a specialist in aggressive dogs, and one of the first dog trainers to use a form of positive reinforcement in his training. I took Jake to William for help. He told me that I would have to change to be able to change my dog. I followed his instructions the best I could. As my dog and I got better, I became more and more interested in helping others who were having problems with their dogs. I continued going back to William to learn more.

William was a big believer in changing the name of a dog when it was being retrained. This was due to the association of the dog’s old name with the dog’s behavior. He gave Jake the name “Alfred.” I was not too fond of that name, and called him “Al.”

It took some time, and a lot of work on my part, to reprogram Al into a dog that could be trusted not to attack other animals, or bite humans. When he emerged as a new dog, it seemed to me that he needed a new name; a name that reflected his new demeanor. His previous names had been given to him by others. I wanted him to have a name that I had chosen. I chose to call him “Silver.” He was sort of silver in color, and I figured that, since silver is not quite the most precious metal, “Silver” was appropriate for a dog who had had problems that showed that he was definitely not the most perfect dog in the world.

With the new dog name came the idea of a company name. To me, thinking that I wanted to help others who were having problems with their dogs, the idea of adding a silver lining to their lives by helping to solve their problems made sense. And, that was that.

What do you think? What does my company’s name say to you?

to Rosebud's weekly e-zine for pet owners who want the best for their pets,

We promise to never sell, rent, trade, or share your information with any other individual or organization.

WANT TO LEARN HOW TO TRAIN YOUR DOG??

BUY THE E-BOOK THAT SHOWS YOU HOW TO HAVE A DOG THAT BEHAVES WELL IN ALL SITUATIONS.

DO YOU LIVE IN THE SAN FRANCISCO EAST BAY? CHECK OUT OUR DOG TRAINING AND PET SITTING SERVICES